Remembering C.S. Lewis and Aldous Huxley on the 50th Anniversary of their Death.


For the last week our televisions and newspapers have been taken up with commemorations of the 50th anniversary of the assassination of President John F. Kennedy.  As I write this, we are just an hour away from bells tolling across the land. It is right that we pause and remember the event that changed so many lives and in ways we won't ever fully unravel, changed a generation of Americans and altered the cultural landscape of our nation.

Two other giants of the 20th century also died on November 22, 1963 and deserve our remembrances and appreciations. Perhaps the most important Christian apologist of the 20th century, C.S. Lewis died in his beloved Oxford the same day one of the most prophetic writers of the century, Aldous Huxley passed away in a bed in Los Angeles. The death of both men was overshadowed by Kennedy's assassination and have been for the last fifty years.  Still, these writers had a profound and lasting influence on minds and imaginations around the world and, at least in the case of Lewis, it might well be that his influence over the last fifty years  has been more wide and profound than was that legacy cut short in Dallas. 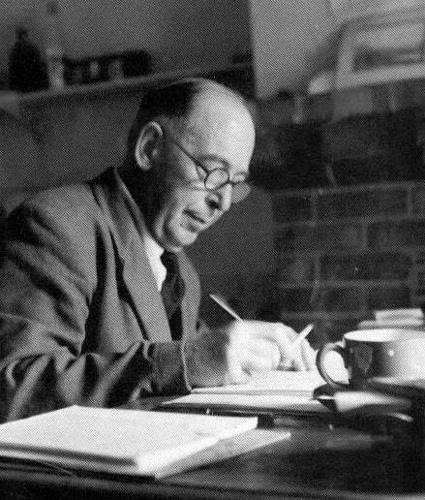 Nearly all of Lewis' books are still available in print and in just the last couple of years at least two new volumes have been salvaged from his records and made available to the public. His life has been the subject of a major motion picture. His children's books continue to baptize the imaginations of our young and have been made into movies that have reached even more. His Christian apologetics have converted atheists, like he once was himself, and instructed anew millions raised in the church. His scholarship stands the test of time. His adult fiction, particularly his novel That Hideous Strength has never been more timely. His The Abolition of Man remains a powerful tonic to the moral relativism of the modern world.

Later today Clives Staples Lewis joins the likes of some of the greatest literary artists in the English speaking world including Chaucer, Browning, Blake, Dickens, Austin, and Kipling, with a special memorial in Poets Corner, Westminster Abbey. The honor is more than well-deserved.

Aldous Huxley's literary influence has not remained nearly as influential as has Lewis' but his _Brave New World_ remains one of the greatest warnings against the trends of the modern world. From genetic engineering to drugs for sexual enhancement, few writers were as prescient about the way our culture would decline into decadence over the last seventy years. His imaginary world built on the elimination of pain and the maximization of mindless contentment deserves reading and re-reading in our age of electronic distraction, declining education standards, and sexual mores as loose as the novelist could ever have imagined.

As we commemorate our fallen political figure today, let's also remember the literary giants who warned us, prepared us, and continue to inspire and instruct those who still read books in our own Brave New World full, as it is, of hideous strengths.
Posted by Gary L. Gregg II, Ph.D. at 7:56 AM No comments:

A Ghostly Tale of the Civil War

I wrote this little tale on Halloween night 2013.

Fog covered the camp as he arose the next morning.  It was early and the late night sentries were exchanging their positions with fresh eyes as he crossed the dewy grass.  “I have never been so glad to see dawn,” one of them said to another, “it was like I could feel ten thousand dead standing up and walking the grounds about that bloody creek.” The boy from Ohio rolled his eyes and kept walking toward the edge of the camp.  He pulled a small mirror from his pocket to check his hair, vanity knowing no end, even in the terrible war of brothers.  He squinted as his eyes seemed less bold and clear, almost grey, in fact.  He looked up at the fog and determined it was just the defuse morning light.

Hands in his pocket, the soldier looked into the dense fog, playing games trying to make out the objects cutting the peculiar shapes.  One was moving and moving fast.  It grew in size and speed at it approached.  A man.  No, a horse. It was a proud and mighty black steed that burst from the oblivion beyond. No rider drove it on, but it bore an empty saddle upon its back, cavalry stirrups dangling at the edge of its belly.  The beast pulled up short in front of the Union soldier.

“Move on, plug. Be your man living or dead, an officer’s mount is no good for me in camp!” As he slapped the horse’s rump, he noticed the saddle had the initials CSA burned into the leather. “Ah, a Rebel horse! Well, who killed your traitor-owner?”

Fueled again with an energy he only knew when he was looking down on someone else, the boy who volunteered each time a chicken needed slaughtered, threw himself up into the saddle.  He felt the power of the horse beneath him and took the reigns into his hands. He would ride it over to his superior officer’s tent and offer it as tribute.  Perhaps he would be rewarded.  It did appear to be a very fine horse.

He dug the heels of his worn and nearly ruined boots into the horse’s flanks.  As he did, he felt his hands tighten around the reins. Pressure built in his legs as they pressed against the ribs beneath. He pulled his right leg and then his left but neither moved. Pressure like arms enveloped his chest and squeezed. The private squirmed but could not move.  He called for help but no one reacted. He didn’t know if they could not hear or the pressure around his chest kept him from emitting the sounds he intended.

The horse reared back and turned.  Out of the camp in Chattanooga it ran.  Into the deep fog. The helpless rider was flung left and right as the horse lurched around trees and jumped brambles and boulders. Onto the fields where sergeants lay next to privates in the equalizing embrace of death, the horse carried its prisoner. Bodies, once full with laughter, now lay in unnatural contortions, their life-giving blood staining the grass and already sunk into the soil below.

The boy thought he could see all the existence of these bodies in all their forms, one after another and almost all at once; Life, agonizing death, deep fear, resignation, the bleaching of death, gaseous explosions before the final stages of decay made the renewing magic of new soil. Movement. The movement of the bodies. Death was to be still, here it was all movement, all change. Fear gripped his soul and squeezed in the same way his body was being held to the horse.

Pulling up to a rising Confederate casualty, the horse bucked. The pressure released. The boy from Ohio felt himself falling toward the killing fields.