Democracy's "Seed of Death"
I recently had the chance to take some of our Tocqueville programming on the road to share it with students at Davis and Elkins College in Elkins, WV. For them, I chose to discuss the following quotation which comes from Volume I of Democracy in America (and which we will be discussing Monday night with Dr. Farrier, I assume).
"Every government carries within itself a natural vice that seems attached to the very principle of its life; the genius of the law-maker is to discern this well. . . every law whose effect is to develop this seed of death cannot miss becoming fatal in the long run, even if its bad effects do not immediately make themselves felt" (227-228).
Tocqueville helps us understand this by talking about an absolute monarchy and how its irrational tendency is to drive ever more power into the central office of the monarch until it eventually destroys itself.
What is this "seed of death" for democracy? Why, it is, of course, the tendency to drive more and more power into the hands of the people.
Tocqueville praises our American founders for understanding this and putting in place institutions that could resist this destructive tendency. They gave us an unelected Supreme Court, an Electoral College (a real one, not what we have today), Senators chosen by state legislatures, federalism and equality of the states, a written Constitution with a specified amendment process that insisted on changes going through institutions in a specified manner.
The progressives told us the cure for the ills of democracy was more democracy. They got many of the reforms that they wanted.  Tocqueville tells us more democracy will destroy democracy.  Which is it? 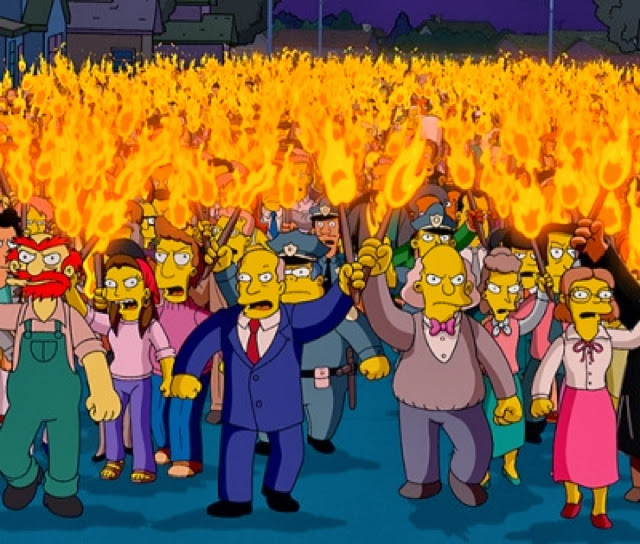 Juries as Schools for Liberty?

Tocqueville Question of the Day--Juries as Schools for Free Citizens
Juries: "one of the most effective means that a society can use for the education of the people" (448).
How many of you have tried to get out of jury duty? You might rethink that after reading Tocqueville, pages 442-450. Indeed, you might just go volunteer!
If asked about the importance of juries, I think most of us would focus on the rights of the accused and maybe as a protection for us all against arbitrary government decisions. Tocqueville, on the other hand, makes some quite extraordinary assertions that place the institution of the jury near the very core of what makes American democracy work.
He argues that it helps us put on the "mind of the judge" which is the kind of habit that best prepares us to be free. We learn respect for "the idea of right" and learn "the practice of equity." He argues that it teaches us not to retreat from responsibility for our own actions, which he calls a "manly disposition" essential to political virtue. It teaches us our duties to society and combats the "individual egoism" that he calls "the rust of societies."
In Tocqueville's understanding, this seemingly minor judicial institution becomes "a free school" for the instruction of citizens and free peoples. "I think that the practical intelligence and good political sense of the Americans must be attributed principally to the long use that they have made of the jury in civil matters," Tocqueville argues.  And he concludes, "Thus the jury, which is the most energetic means to make the people rule, is also the most effective means to teach them to rule."
If Tocqueville is right, our challenge, it seems to me, is to find ways to make MORE use of the jury system. If jury trials are a key way of educating our citizens, then we need more opportunities for more citizens to serve and hence to be educated in the dispositions necessary for liberty.
Teachers: I wonder if you might be moved to try to work jury trials into your curriculum? Has anyone tried that? What do you think of such an exercise? Is there anyone out there with a curriculum using juries? Maybe it is something some center dedicated to civic education might develop if there is a need.
I have long hoped to be called for jury duty. I hope for it even more now that I see how much Tocqueville values the institution. I am eager to participate and test his ideas.  Also interested in hearing from any of you who have served on juries or who have thoughts about Tocqueville's understanding of them. 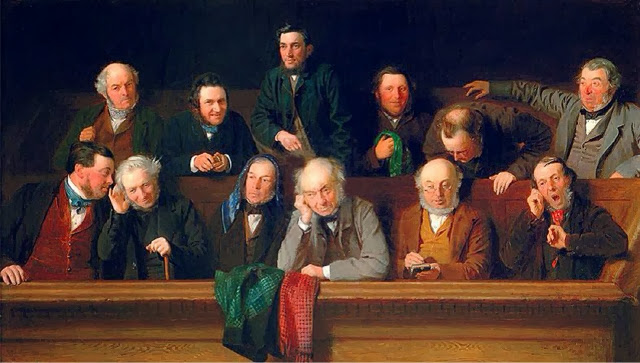 Tocquevillian Thought of the Day--Local Authority and Fracking

Local Authority, the Nurturing of Citizens, and Hydraulic Fracturing


I just returned from a terrific visit to my homeland of southwestern Pennsylvania, one of the nation's hotbed areas for hydraulic fracturing.  Recent news out of Pennsylvania has a distinctly Tocquevillian tone, I think, so I decided to share it.

This is not a blog either defending or attacking the extraction of natural gas through the method of fracking. This is a note about local authority and the nurturing of citizenship.

Last winter the centralized government of Pennsylvania decided that zoning for fracking was too important to be left to local authorities and wiped out the right of local areas to create their own zoning laws when it comes to this practice.  A Commonwealth Court overturned this "Act 13" recently, though the Governor has vowed that he will appeal that decision.  The state, and the industry, argue for the need for centralized and uniform regulations. The Court argued that to allow the state to intervene in such a zoning issue will effectively eliminate all restraints on state power over such traditionally local decisions.


What would Tocqueville have to say?

Tocqueville argued very strongly that vibrant local authority was s key to the preservation of American liberty.  His history shows American society growing up and out from the local authority rather than being handed down from a centralized government. This "direction" in his history/ sociology is very important and contains numerous policy and philosophical implications that I don't have time for here.

But he goes even further. He argues that it is in local politics, towns in particular, that free people learn how to be free. "Town institutions are to liberty," he says, "what primary schools are to knowledge; they put it within the grasp of the people; they give them a taste of its peaceful practice and accustom them to its use" (102).  Summarizing his ideas he says it is in such local institutions where the American "gathers clear and practical ideas about the nature of his duties as well as the extent of his rights" (114).

Again, this note is not about fracking or economics and related questions can be debated. But, Tocqueville, I think, teaches that in terms of nurturing citizens and preparing them for liberty, the right decision is to leave such decisions to the local authorities. If local governments don't have power over such important things as what types of businesses will be permitted in their community and what type of environmental damage might be prohibited, what would encourage citizens to be engaged? Why would the best in our communities want to run for office or show up at town hall meetings if they could only influence the leash laws or garbage routes?

Whatever its other merits, it seems to me the Court's decision was the right one from the Tocquevillian perspective and the state of Pennsylvania is thinking more about economics and jobs than it is about citizens and liberty. If you had to choose, would you choose to have more jobs or to have more informed, engaged, and empowered citizens who know their duties and their rights? Which would George Washington or Thomas Jefferson prefer?

Tocqueville's Question of the Day--Presidential Elections: Agitation and Reelection

Question of the Day--Presidential Elections
Today Tocqueville helped me think through presidential elections a bit and come to think about how much we take them for granted. Unlike us, he considers elections to be times of great crisis in a democratic nation. The public gets engaged against one another. Rather than working together, the forces of society are locked in battle. We have come to expect a perfectly peaceful resolution of such internal political wars, but Tocqueville helps remind us how unique the American experience was in the history of politics and helps us think about how unique it still is today. We should give some thought to what it is (culture, tradition, values?) that keeps blood from running in the streets after an election--even a contentious one like 2000!
In America of the 1830's, Tocqueville saw a country that was incredibly mobilized for battle every four years. And yet, he marveled that the American people became so agitated at elections when the presidents of this whig period of American history were so relatively powerless.  They had few unilateral powers, played a small role in domestic political life, and had very few patronage positions to spread around.
Fast forward to the modern presidency where the executive branch is comprised of hundreds of thousands of employees, the president is Commander-in-Chief of the most powerful military force ever assembled in human history, and where we have centralized vast unilateral power in the White House. Are the American people more drawn to politics and elections since the stakes are so dramatically higher than they were 170 years ago? If not, does it say anything about our character? Is it, maybe, a part of our political stability that so many of us are not much engaged in political life?
On a related point, Tocqueville makes an interesting observation about the impact of presidents running for re-election. He says that allowing presidents to run for re-election will make them "only a docile instrument in the hands of the majority. He loves what it loves, hates what it hates; he flies ahead of its will, anticipates its complaints, bends before its slightest desires. The law-makers (founders) wanted him to lead the majority, and he follows it" (229). This is particularly a problem during the last year of a president's term, Tocqueville says, and especially in an age where political morality had become lax (which he saw happening in America in the 1830s, btw).
Do you think our prohibition on third terms has satisfied Tocqueville's concern? Have our presidents become less subservient to the public mood?  Do you think there is a danger in presidents following public opinion too closely? Or, was Tocqueville too distrustful of the public mind? 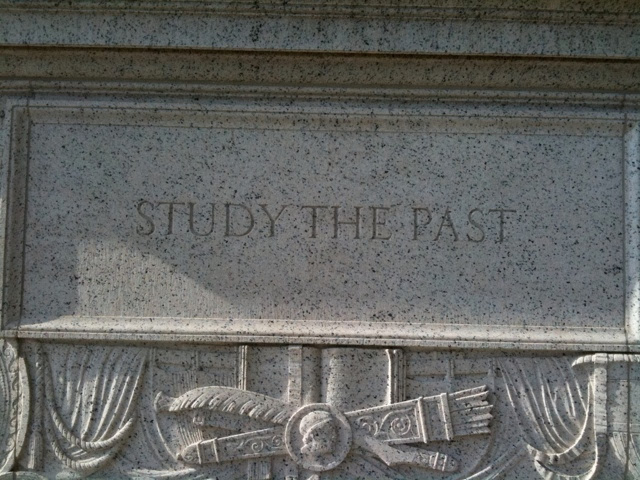