George Washington is NOT Overrated!

George Washington is NOT Overrated!

The story comes from Chris Cillizza, the Washington Post political columnist who asked readers to rank overrated and underrated presidents earlier this week.  He then released the results sometime yesterday (but to my box this morning).  The poll seems to be nothing more than reader reactions but still it is very troubling that Washington would be considered overrated.  The fact is, if anything he has become  underrated in American history and the state of our current politics might well be connected to it.

Let's get this straight and simple.  There would be no country if it wasn't for the man called "The Father of his Country!"  He virtually created it on the battlefields of the Revolution and in his teachings and presence afterward.  There would be no Constitution providing our fundamental law if he would not have lent his reputation and his leadership to the Constitutional Convention and the ratifying debates.  The presidency itself would not have existed if he had not demonstrated that he could be trusted with power and could unite the nation.

He created the cabinet structure. He established the first government. He decided how presidents would interact with constituents and representatives of the world. He determined how presidents would interact with Congress. He created the practice of executive privilege.  He determined that the title of Commander-in-Chief did not include actually leading the troops in battle. He kept the nation united when numerous forces wanted to pull us apart. He kept us out of a disastrous war when we could least have afforded it.  Rather than benefiting from holding the office (which almost all other presidents have done), he loaned his world-wide reputation to create the office for others to inherit. And then he retired to Mount Vernon after two terms.

In many polls Lincoln and FDR now trump Washington in our rankings, which is a terrible insult to the man who built it all.  Lincoln did nothing more than save what Washington created and FDR did even less.

It would be nearly impossible to overestimate the man his contemporaries rightly referred to as "His Excellency!"  Happy birthday to the greatest president and one of the greatest statesmen the world has ever known.
Posted by Gary L. Gregg II, Ph.D. at 6:14 AM No comments: 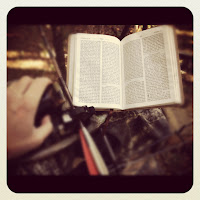 I make no claim to being even a decent poet (or of knowing what that would mean).  But, I occasionally put pencil to paper and something comes of it that I am not totally ashamed of (again, perhaps I don't know enough to even be ashamed when I should!)  These are some of the poems I wrote on cold mornings in the deer woods in the Fall of 2012. 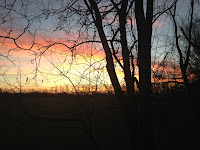 Gold
laid out in sheets
upon
the banquet table
of the sky.

Fade,
pink and purple
before the sun god
searching for his treasure.

Rise
he does and bathes all
in the light that
bleaches clean.

Gold
not to be captured
by gods or men
until the last day burns
in flames that quench.

Cat
after smaller prey
joins us in the hunt,
its paws more stealthy
than our man feet.

We wish each other
well in the sport
that meant survival
to our past.

We both reach back
in these fields
and brush the face
of kin long gone.

A moment of freedom
amidst our captive bliss. 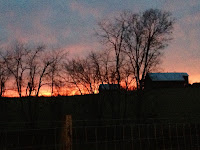 Orange
blossoming through the
sky roots of the
November trees
to kiss the fields of green.

Sliding across the grass
with effortless grace
toward the anchor of this tree
toes, legs, chest, face.

May I never resist
the grace of days. 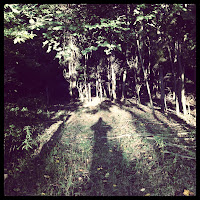 Mottling the woods
with sunlight and shadow

The rising chases the darkness
into its holes.

Cower, darkness
Cower before the light
of a new dawn.

Return not
until the setting
fills your belly with false courage
and you lie in pride upon the land.

Conquering only
until the rising.
Posted by Gary L. Gregg II, Ph.D. at 9:27 AM No comments:

The Platonic Imagery of Mumford & Sons

The Platonic Imagery of Mumford & Sons

I am not someone who should ever review music, my tastes being without pattern when they exist at all.  But, my students and an old friend have recently introduced me to a very intriguing band who released their second album to great fanfare in late 2012.  Mumford & Sons, a quartet from west London who play a version of American folk rock music, have travelled the U.S. in their "Gentlemen of the Road" tour.  Last evening a friend who has gone to their concerts described them to me as full of "20-somethings who love the music and 40-60 year olds who are there pondering the deep meaning of the lyrics."  Since I am in the latter age category, I've got a few thoughts about some of their lyrics which I find full of powerful imagery and deep meaning.

This week the students in my political leadership course at the University of Louisville and I discussed Plato's famous "Allegory of the Cave" and, though I don't assume to know what the song writer meant, the parallels between Mumford & Sons' song "The Cave" ( http://video.answers.com/mumford-and-sons-performing-the-cave-live-at-the-music-hall-of-williamsburg-473940896 )and the Platonic story are impossible to miss. (As are illusions to Homer and other ancient texts, but I won't confuse things too much today).

Plato invites us to imagine a society as a dark cave (Book VII about 514B-520D) the average person being shackled to a post staring at the back wall.  Those people spend their lives looking at the shadows on the wall and assuming they are reality.  Though they don't understand it, the voices and sounds they heard were mere echoes off the wall of shadows. Ignorance reigns in the human condition.

Beyond the objects creating the shadows, however, is the half-truth of the firelight and beyond that is the truth that exists in the world of the sun outside the cave.  The role of education is to help students (and us all) to turn away from the shadows toward the light of truth.  Coming to understand that our lives have been lived with lies and that truth lives beyond our comfort zone is painful and requires a great struggle to accept.

But for Plato the great goal has not fully been achieved when enlightenment is found outside the cave. Rather, Plato then lays a responsibility on the enlightened one to re-enter the cave (again a painful process, now reversing the trek by leaving the light for the confusing darkness of the cave) in order to encourage and serve those left in ignorance.  Mumford & Sons capture this situation brilliantly in their lyrics.

The band seems to sing to a fellow human being, perhaps a lover, who is still shackled to the stake of ignorance in the cave:

They capture the pain of enlightenment and the need to embrace the discipline and discomfort that comes with the journey from the shadowlands toward the light where truth is found--including the truth of knowing who one really is.  It is surely the truth that will "refresh my broken mind."

Plato tells of the plight of the political leader or educator (an allegory of the trial and execution of Socrates?) who returns to share his knowledge with the people still comfortably playing games with the shadows.  These servants would be mocked, dismissed, and perhaps even forcibly reeducated or killed.  Mumford & Sons captures this situation with defiant lyrics:

And issues the challenge to come out of the cave of ignorance and see the great Truth that lies beyond the shadows the politicians and corporations and movie makers and teachers and public relations people tell us is reality.  The maker's hand is waiting to be known:

Plato knows the power of the siren's call to "fit in" with your peers and love interests and become "well-adjusted" to society.  It takes a defiance and strength to get free of the culture and to be what we were intended to be: "To live my life as its meant to be"

"To live my life as its meant to be." What a life-changing goal for us all. . . to strive to know what it is to be human, what it is to live a life worthy and humane, to be what we are meant to be.  And, what a great excuse to re-read Plato, ponder Mumford & Sons' outstanding songs, and wonder what might someday call us out of the cave.

Email ThisBlogThis!Share to TwitterShare to FacebookShare to Pinterest
Labels: allegory of the cave, mumford, mumford and sons, music, plato, the cave, The Republic

Tonight I found a posting from an old acquaintance from high school on my Facebook Newsfeed.  An avid and proud reader, which I admire very much, she was very upset for having gotten a used book off the Internet that turned out to have been underlined by a previous reader.  In all fairness, she did say she was upset because the description did not mention any such markings but my advice to her was to treat this as a gift instead of the perpetuation of fraud.

Books are not sacred objects, they are tools.  The ideas found on a book's page might be sacred, the truths of the words might be divine.  But the book itself is a tool meant to be used, read, reconsidered, and made one's own.

The practice of decorating books with marginalia has a very long history, going back into the first century BC when "Scholia" were added to classical texts. Some of these marginal notations are among the most important clues to life and thought in ages long grown dark with time.

I find it difficult to borrow any kind of serious books, from friend or library, because I want to make the text my own.  I want to interact with the author, but more importantly still, I want to make the book a useful tool I can come back to over and over again to remind myself and learn anew.  When I pick up a copy of a book I have read, by eyes are not lost among the thousands of words but are drawn to those key passages I felt important.  When a student asks to talk about a book she has read, it is a wonderful tool to go to my shelf and and find a copy that has been marked and made more useful.

Some of my students have difficulty writing in their books and that is why I buy them each a copy of Marcus Aurelius's Meditations.  "This is not your book, it is mine.  If I want it back, I will ask for it back, so you  have no excuse but to follow my demand that you take this text, read it, mark it, and make it your own!" I check their progress once a week with the hope that a habit will be created to help them build a truly useful library that is truly their own.

And, what a great gift a marked copy of an important book might be to a friend or to a grandchild.  My Grandfather, Thomas Edward Gregg passed away thirty years ago today.  I miss him terribly. What I would not do to have a book or a Bible marked up by him so that I could ponder with him even today and so that he might take my hand even now and lead me on.

If you get a text that is already marked up, treat it as a gift from some unknown soul who may speak to you in your time of need.  Take your favorite book, or perhaps a Bible, and mark it up and pass it along.  Who knows whose life you might profoundly touch from beyond your own grave?
Posted by Gary L. Gregg II, Ph.D. at 6:32 PM No comments: