Leadership and the Moral Imagination, a snippit. 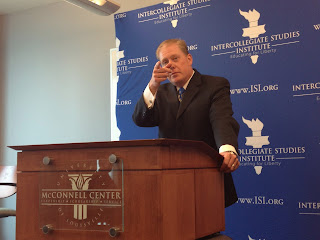 Here is a snippet from my talk tonight on leadership and the moral imagination to students of the Intercollegiate Studies Institute.


The phrase "moral imagination" is from that great 18th century British parliamentarian Edmund Burke in his  Reflections on the Revolution in France.  Attacking the French Revolution, he wrote the following difficult but very insightful paragraph:
"All the decent drapery of life is to be rudely torn off.  All the superadded ideas, furnished from the wardrobe of a moral imagination, which the heart owns, and the understanding ratifies, as necessary to cover the defects of our naked shivering nature, and to raise it to dignity in our own estimation, are to be exploded as a ridiculous, absurd, and antiquated fashion."
*****
Now . . .
“furnished from the wardrobe of a moral imagination. . .”  What on earth does that mean?  I read Russell Kirk’s essays on the topic.  I read and reread Burke’s language.
Maybe I am not as smart as most, but I know I wrestled with this concept on and off for a decade or more before it finally started to make sense to me.  It was like one of those lizards you grab at and think you caught and then it scampers out of your fingers and you are left with just the decoupled tail.
I don’t have time this morning to give you a full treatment of the topic of imagination or that particular variant called the MORAL IMAGINATION.  I don’t have time this morning to explore all the intricacies of the argument or what I have learned about it all in the last decade.  Instead, I want to offer a few thoughts to set up a couple of the ways I have come to think of the power and importance of IMAGINATION and particularly of what I think is the essential link between imagination and LEADERSHIP.
My own eureka moment came when reading Robert Penn Warren’s Pulitzer prize winning novel All the King’s Men, a book I highly recommend to you. It is mandatory reading for my leadership students. There is a scene in that book that rocked me back on my heels.  To boil it down, the scene had one man (Jack) changing another man’s mind (Dr. Stanton) and convincing him to do what Jack wanted him to do.  (That is, jack was exercising leadership).  When asked how he did it, Jack said that he “changed the pictures in Dr. Stanton’s head.”
You see, he didn’t give him a better argument.  He didn’t threaten or bribe him.  Those tactics wouldn’t work with a man of such integrity as Dr. Stanton and he knew it.  He changed the pictures in the Dr.’s head and that was sufficient.
This insight, that we might be driven in our actions, not so much by cold, calculating reason but by the pictures in our head, forms an essential foundation of what I want to talk to you about today.
I have become convinced, we are all governed by the pictures in your heads.  We are sad or happy, successful or a failure, well-adjusted or an outcast, Christian or pagan largely because of the pictures we carry around in our heads.  They are essential to who we are.
We all carry pictures around with us from all sorts of places: parents, teachers, loved ones, movies, music, classmates, church, books.
If you are a conservative, you probably carry around with you certain pictures of things you want to conserve and find true and others you find false and maybe even dangerous.  More on that as the week progresses.
So, back to my more general point; these pictures, in other words, are what inhabit our imagination.
It is those pictures that govern our lives.  It is our imaginations that rule our world.
We can’t get any further than the pictures in our heads allow us to go.  We can’t do anything that the pictures in our heads tell us we can’t.
And so you might now start to see the genius of Dr. Kirk’s friend who claimed we could reform our politics by infusing poets into the process as advisors to our leaders.
Our political figures are governed in their actions no less by the pictures in their heads and the quality of their imaginations, than are we.
It was a twisted and diabolic imagination that made possible Nazi Rule.
It was the idyllic imagination that made possible the terrors of the French Revolution and the excesses of 20th century communism.
Think of the differences in public policy decisions made by a political leader who had visions of America as one huge secular empire.  And another whose vision of America at its best is that of a republic of small republics who worship as communities and raise families according to shared values. What divergent decisions those two would make! 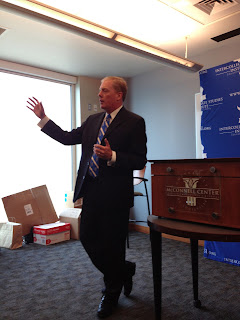