The Dalai, the Dinosaur, and the Tao

The Dalai, The Dinosaur, and the Tao 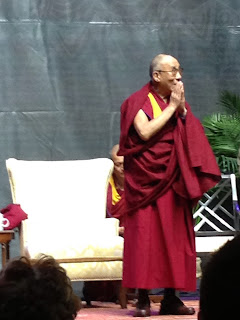 Here are the last two paragraphs from a short essay I wrote after having the chance to listen to the Dalai Lama in Louisville, Kentucky on May 21, 2013.

"At the root of the Dalai Lama’s understanding of the good life is a profoundly illiberal understanding of humanity. Where the modern liberal project is based on the Lockean and Hobbesian lie that everything rests on the autonomous individual, the Tibetan gave us a vision of humanity existing in families and in community with one another. He told the story of how his illiterate mother carried him on her back while she toiled in the fields and how he learned compassion through a deep and nearly constant communion with her.  A good life within the Tao sometimes requires us to carry others and sometimes to be carried as we attempt to make our way on this journey. We are never really autonomous and self-sustaining individuals. The very office of the Dalai Lama teaches just such an understanding as Buddhist believe he is the reincarnation of a soul who reached its journey but turned back to commune with those still suffering and striving.

"Perhaps we should not be surprised that the teachings of the Dalai Lama are so fully within “the way” that C. S. Lewis identified.  What is surprising is how much the undergirding vision of the man and his teachings are misunderstood by the post-moderns who admire him for lessons they don’t quite understand.  For the sake of the Tao itself, let us hope this 14th incarnation of the Dalai Lama is not the last of his kind. For now, we Christians of the west should join in his teachings as we are all, despite our differences, either within the Tao or in the shadow lands beyond."


Thanks to the Drepung Gomang Institute and the Kentucky Center for the Performing Arts for hosting the Dalai Lama and (Traci Simonsen) for inviting me to tag along.

The full essay can be found by going to: